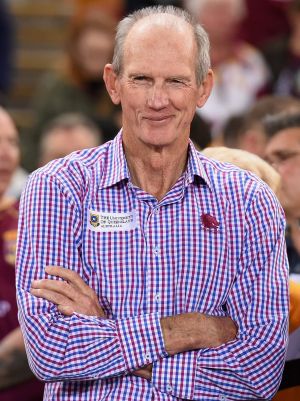 Former professional Rugby League Player and current head coach of the Brisbane Broncos, Wayne Bennett AM will be the special guest speaker at our first formal dinner of 2017.

In 2016 Bennett became the first non-British person to be appointed head coach of the English national Rugby League side.

An Australian international and Queensland interstate representative winger or fullback of the 1970s, Bennett also worked as a Queensland Police officer before becoming a Brisbane Rugby League premiership-winning coach, and in the 1980s earned selection as Queensland’s State of Origin coach. After starting his NSWRL Premiership coaching career with the Canberra Raiders, in 1988 Bennett was appointed the inaugural coach of the new Brisbane Broncos club, later winning six premierships with them, and in 1998 was first selected to coach the Australian national team. He has since coached the St. George Illawarra Dragons (with whom he won the 2010 NRL Premiership) and the Newcastle Knights, and set Australian coaching records for most grand final wins (7) and most seasons with a single club (21).

We are delighted to welcome Wayne Bennett AM to St Leo’s College in March as UQ enters its third year as a major sponsor of The Broncos.