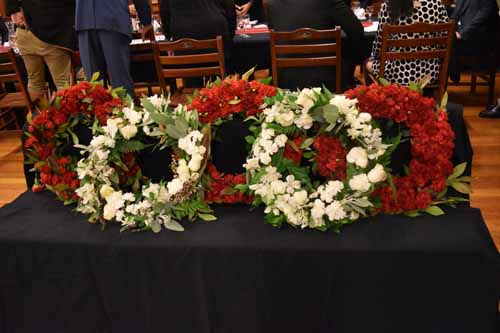 ANZAC memories give us pause for thought

On Tuesday evening Residents from each of the World War 1 era Colleges joined together to remember their Residents who served Australia on the front line during the last 100 years.

Presidents from each of the Colleges read the names of their fallen Residents and laid a wreath in their memory. St John’s was represented by Tristan Heiner, Emmanuel was represented by Angela O’Connell, Abby Battersby represented Women’s College, Jack Jamieson from King’s and Ben Hooper, our 2017 Treasurer, spoke on behalf of St Leo’s.

Prior to the wreath ceremony we heard from Tammy Williams who is the Deputy Director General, Aboriginal and Torres Strait Islander Partnerships. Tammy was admitted as a barrister in 2002 and her legal accomplishments are informed by her experiences as a Murri woman. Tammy reflected on the treatment of Aboriginal and Torres Strait Islander servicemen and women who fought to defend Australia during battle. She described rules which suggested Aboriginal servicemen could only enlist if their skin was ‘white enough’. Many people enlisted and were treated as equals however this did not continue after the war. Some of Tammy’s statements were uncomfortable to hear and seem unbelievable today however she pointed out this was not a session intended to make people feel guilty – it is about education and looking forwards.

Around 150 St Leo’s Residents journeyed to the War Memorial in Brisbane on Tuesday 25th in order to pay their respects and lay wreaths.