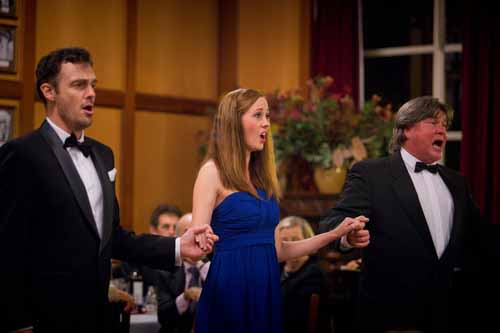 Oh what a night…at the opera

On Tuesday night we held our annual Night at the Opera dinner and – oh, what a night!

Pat Lynch, our Senior RA, entertained us on The Deck beforehand which put everyone in the mood to enjoy some more music.

After a welcome to country by Leonian Jahmayne Coolwell and Brother Rob Callen led us in Grace the night began.

Performers Jessica Low, Sam Harley, Bradley Daley and John Woods (on piano) came from Opera Queensland and we welcomed our Residents, Leonians, guests from UQ School of music and some of our Grace friends to enjoy a night of top notch music. We even had the Director of Music plus some of the high achieving music scholars from Toowoomba Grammar School joining us. It gave them an insight into College life as they approach the end of their high school years. TGS Old Boys – Toby Burstow, Pierce Leahy and Saxon Howard-Secombe hosted them for the evening.

We enjoyed performances from a range of operas including:

During the evening Bradley explained he has just returned from Germany where he has been appearing in Siegfried. He has also appeared in the longest opera written – which means performing for 5 hours.

Like Bradley, Jessica studied at The Queensland Conservatorium, she is also part of the group 7 Sopranos. To help with her Opera Jessica studied Italian through UQ’s Modern Languages Institute.

During the evening Bradley ‘serenaded’ a severed hand and finished the evening’s entertainment with the entire audience joining in a chorus and waving napkins around!

If you want to relive the night in under 2 minutes watch the video or enjoy the photos.

We are already looking forward to the musical gems we can expect next year.