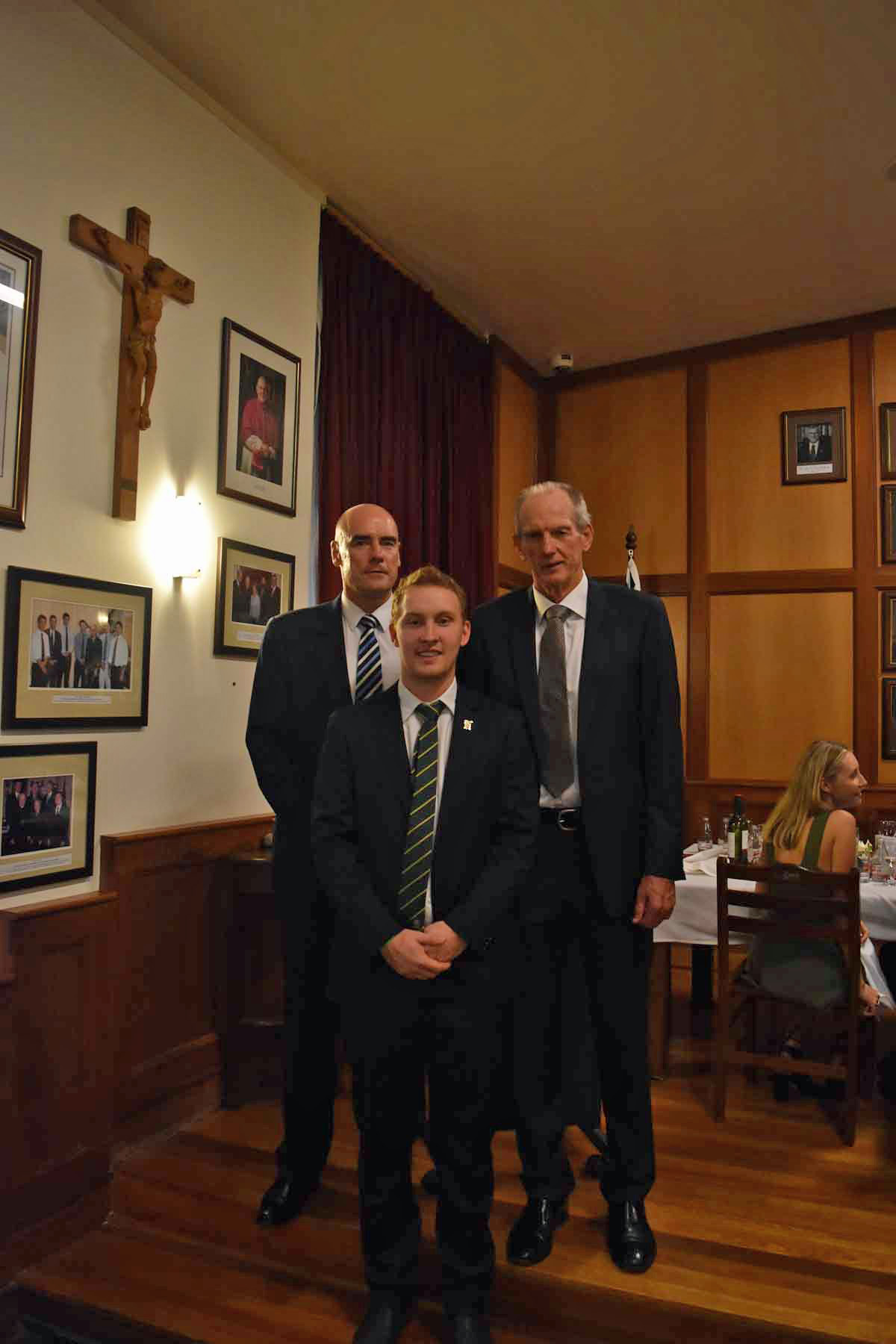 On Tuesday night we had the first formal dinner of our Centenary year – our Commencement Dinner – and what a night it was!

The evening kicked off with Toby Burstow and Patrick Lynch playing sax on The Deck whilst our guests and Residents enjoyed some informal drinks.

Leonian Jahmayne Coolwell welcomed us to Country while Robert Falzon, one of our College Councillors, led a Grace prayer.

Between courses academic awards were presented to Residents and alumni based on the 2016 academic year:

Residents who achieved an average GPA of 6 or higher throughout 2016:

Faculty prizes for Residents who scored the highest average GPA in their faculty:

The Rector's Prize is awarded to the first year Resident with the highest average GPA. This award went to Daniel Nunns who managed to maintain an average grade of 7 throughout 2016.

The McKenna Prize is awarded to the Resident with the highest average GPA, who is not a first year. This was awarded to Keann Chong, who left St Leo’s at the end of 2016 however he is continuing his studies at UQ. We were lucky enough to be able to welcome back Leonian Patrick Doolan who was here until 2011. Patrick was the UQ Graduate of the Year in 2012.

The Blessed Edmund Rice Prize is awarded to the Resident who shows greatest College leadership, generosity of spirit and who has made a significant contribution – often to the social justice programs with the College and the broader community. Based on 2016 this was awarded to Jordan Huggett who has taken on a specific role at the College in 2017 as a Community Coordinator and he is organising events such as Clean up Australia.

After dinner we welcomed our special guest speaker, Wayne Bennett AM, up to the podium. Wayne began by telling us he prefers to be at the back of the room with his mates, rather than at the front while people listen to him speak.

He said he has challenged himself all his life to be better than he was yesterday. He also said he makes choices every day. One choice was to be the best coach he could be. As a younger man he knew he would need to become a better communicator to be a better coach however he still doesn’t necessarily enjoy the spotlight and often pretends to be someone else if he is spotted by a member of the public. One time he claimed to be Wayne Bennett’s brother. The person talking to him said he was more talkative than his footy coaching ‘brother’.

Bennett talked about learning how to laugh at yourself if you do something silly and advised us to be the first person to put our hand up and take responsibility if we have done something wrong.

Wayne said he had come to the event to challenge us. He posed a number of questions:

Wayne has coached rugby players for a long time. He said: “Young men have unlimited potential and the majority waste it. Your future greatness will be determined by what you make of yourself, not on your IQ.” He challenged everyone to be honest with themselves and ask if we are getting the best from ourself rather than making excuses about why we cannot do or be what we want.

Wayne talked about the waste of time it is if you compare yourself to other people. He gave Ian Thorpe as an example of someone who knows the negative impact of doing this. He spoke about finding happiness inside and not looking for it to just come to us.

Bennett talked a lot about making commitments and following through. Start with a choice, make a commitment and see it through. Do not make excuses as to why it isn’t happening. He likened excuses to lies you tell yourself or your friends or your family.

Bennett mentioned a concept of ‘living above or below the line’. Above the line means you live a responsible life and take ownership of the things which need improvement. He said if you are a good friend you will tell your mate if he is living below the line. Wayne was clear he is not advocating perfection. “It’s about excellence and being the best you can be”. Put aside what you don’t have so you can maximise and be grateful for what you do have.

“You can’t change everything however you can improve”. It is also never about what others think – it is how you feel.

Wayne finished up the talk with some questions. He was asked many questions and he reiterated his earlier wisdom. When asked whether his methods would be different if he coached young women he simply said: “Oh, yes.”

He is sometimes a man of few words however they are often well thought through with great depth.

Bennett’s talk was a little bit like getting a kick up the backside from one of your parents, albeit in a really calm and collected way. Most people in the room could be seen pondering his words. He was quick to admit it was parents, teachers and employers who have taught young people of today to be less resilient. He said it so that our young Residents can build that resilience and cope with the hard knocks which will inevitably come their way in later life.

Wayne spent a lot of time at the College and posed for lots of different group photos. He didn’t leave until everyone who wanted one had a picture. Wayne was very popular – even the Cowboys fans were queuing up!