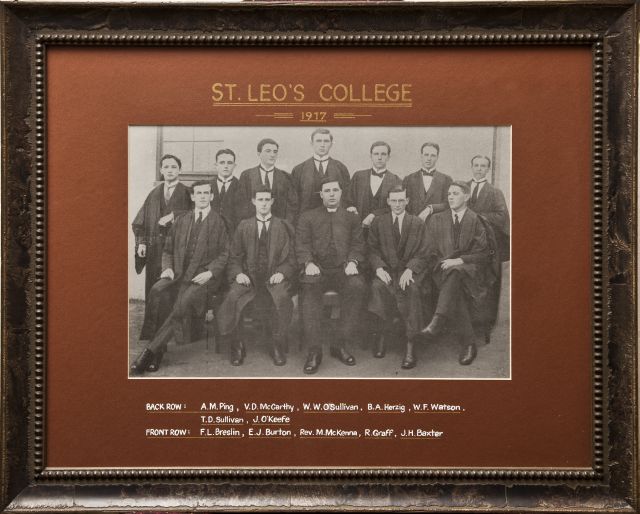 Photo is a blast from the past

On September 30, 1917 St Leo’s was officially dedicated and the Archbishop of Brisbane – James Duhig, the Archbishop of Sydney – Archbishop Kelly and the first Rector of St Leo’s – Father Michael McKenna. We have a photo at Leo’s which shows these VIPs along with the original Residents.

For the one hundredth anniversary we will be recreating the photo on Saturday 30th September from 14:30 at St Leo’s.

The Archbishop of Brisbane – Mark Coleridge, Chair of College Council – Daryl Hanly OAM, Chancellor of UQ – Peter Varghese AO, The Papal Nuncio – Adolfo Tito Yllana, Head of College – Steve Foley as well as Residents and Staff will all be attending the event.

The resulting photo will be displayed in the College alongside the original.

If you are a member of the St Leo’s alumni and you would like to attend this event please come along on Saturday 30th September from 14:30. Refreshments will be available in the JCR so please go straight there and we will direct you on the day.

On the same day you will be able to hear the debut of 'Stand in the Light' - the St Leo's Fanfare which has been composed by our current Resident Liam Mallinson. Liam's composition will be played by current Residents: Pierce Leahy (on piano), Tyler Kiernan (on trumpet) and Saxon Howard-Secombe (on trumpet). You will also be able to view the recently received Papal Blessing from Pope Francis recognising our Centenary.

Come along and be a part of history.