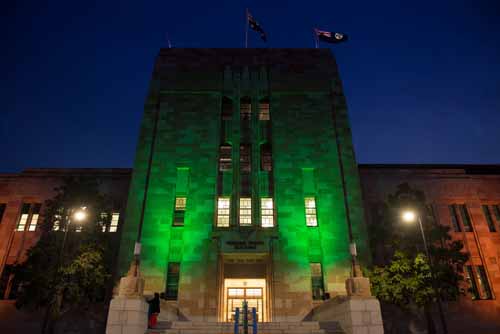 It has been a busy year all-round due to the Centenary. Here is an events-round-up for September and October.

At the start of September we welcomed back some of the St Leo’s Students’ Club Presidents and their guests so we could talk about ways to reach more of our alumni and we invited them to tell us how they thought we could improve the College. We had a few Duchesne alumnae among the guests so their input was helpful too.

The Presidents’ Dinner was a good start to one of the biggest weekends of the year – the F&K Cup!

The Francis and Kassulke Cup 2017

At the start of every September we play in the annual grudge match against our College neighbours, King’s College. We have not won this match since 2008 and so we were hoping for a Centenary miracle to stop the deadlock.

The game was extremely close and we were tying the lead a number of times however each time King’s got back on top of the leader board. After a very hard fought match the final score was 28-19. Man of the match was Jordan Huggett who captained the side to the closest score in a number of years.

Watch out King’s – we are coming for you.

On September 19 we hosted the former Irish Ambassador to Australia, Richard O’Brien who spoke about his work since moving from the Emerald Isle. Richard’s lecture was entitled ‘some personal reflections on the story of the Irish in Australia’.

As this was a significant night in our Centenary calendar we were lucky enough to have the Forgan Smith building bathed in St Leo’s colours of green and gold.

As is our custom at this time of year we got everyone out of bed nice and early so we could take a photo of the whole College. We often get visitors to the College looking for relatives in the photos. When new Residents start in February they are often looking for their Dad or Grandad within the images.

All of our third year Residents were given a copy of their photo to take with them.

The last formal dinner of the year is the Valete Dinner. We look back on the year and celebrate the great achievements of our Residents. This year was no different and we presented: 24 Blues and Half-Blues awards, a number of individual sports awards, 6 cultural awards, 15 Social Justice awards as well as our final big five awards.