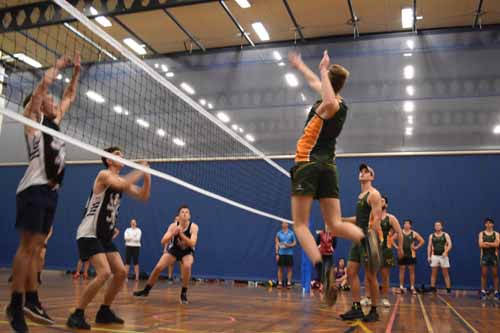 It has been such a busy semester and the last 2 months have been relentless. Our guys have been pushing themselves on the sporting field and in the cultural arena too. Here is a round up of the latest news on that front.

We have had some great results this semester which now sees us sitting in third place on the ladder - which is our best position for a long, long time.

College Idol - Patrick Lynch, performed in College Idol and came in fifth place. Pat played and sang 'Blame it on me' by George Ezra.

Choral Fest - We took out third place in Choral Fest this year with renditions of Tshotsholoza, Fire and Rain and The Wiggles' Rock-a-bye Bear. (Photos in link - click on Choral Fest title).

Art Show - the College was filled with some unique pieces of art in the last few weeks and as a result of our residents' efforts we secured joint fifth.

Debating - our debating team were doing a great job however lost in their semi-final and so took home fourth place.

Chess - with our best result this semester we came first in the chess competition after a fantastic final held at St Leo's. Home advantage? No - just awesome chess masters. By the way, the runners up (and the team we beat) was King's.

Touch - We took home the runners' up prize in the touch comp this year and sadly were pipped at the end by King's. (Photos in link - click on Touch title).

Cross Country - After a fantastic run we managed joint fifth with Union College.

Volleyball - After some hard fought matches we managed to finish up in joint fifth place alongside Cromwell College.

Waterpolo - After a great result in the swimming event (where we placed third) we only managed seventh in waterpolo.

Pictures of our guys when they took on King's.

Cricket - It wasn't our year for cricket and we finished up sixth on the leader board however we did have a great win against Cromwell/Union College: The top Scorer was Tim Broadfoot with 78. Man of the match was Michael Effeney for hitting the biggest six the college has seen in 100 years.

U20 Rugby - We came fourth in U20 Rugby however the competition was very close this year and only a few points separated the top five teams. Here is the team with a win under their belts.

Rowing - We had a lot of fun at the Regatta!

So we are looking forward to a really positive semester 2 to pull us up from the bottom of the leader board. Come on you Leonians!