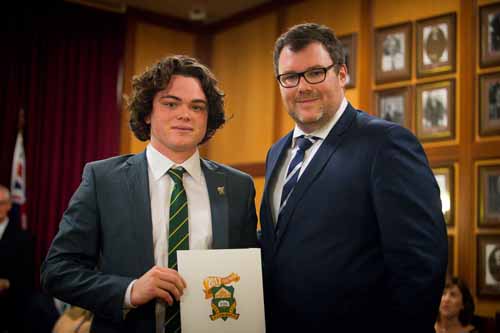 After holding the annual elections and interviews we now have our student leaders for 2018.

Did you guess?! Tim Boniface has been elected as Student Club President for 2018. Tim was the Culinary Convenor in 2017 so clearly his kitchen skills have stood him in good stead to become 'Head Chef' next year.

Joshua Curti (front of picture) will take on the VP role next year. Joshua has been managing merchandise this year and this along with his academic awards and dance moves made him the obvious choice to be 2IC. Want to see those dance moves? [bs_icon name="glyphicon glyphicon-film"]Press play!

The Phantom from 2017 has decided to hang up his costume and take on a more scholarly role - as Secretary. In a nice little family twist Tom Effeney takes over from his brother Michael who held the role this year. It also means we will see Tom introducing the Duhig Lecturer in 2018.

A new face to the Student Club is Tyler Kiernan who will be looking after the money in 2018. This year we have seen Tyler working with the St Vinnie's group as well as playing his trumpet both at the ANZAC Dinner and at the Anniversary Photo when we debuted the St Leo's Fanfare - Stand in the Light.

After getting applications from almost a quarter of the Residents at the College we have now chosen our Residential Assistants for 2018.

Teague Moloney will take on the role of Senior RA. Fun Fact - Teague and our new President, Tim, attended Ignatious Park College together in Townsville.

Returning RAs from 2017 we have Brad Britton and Matt Martyr. Our new RAs are: