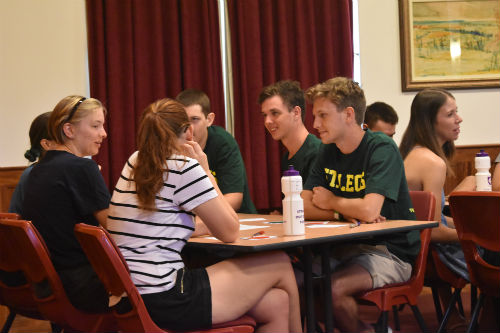 In February 2016, Australia's universities launched a ground-breaking initiative to prevent and address sexual assault and harassment across the sector.

It builds on work done by individual universities in Australia over many years to develop policies, reporting procedures and support services.

The survey findings will be published by the Commission in a national report to be released on 1 August 2017.

Members of the Executive Management team at St Leo’s College attended the AACUHO (Australasian Association of College and University Housing Officers) national conference earlier this month. The conference took place in Hobart and as such was opened by the Governor of Tasmania the Honourable Kate Warner AC.

Ms Warner talked about many issues facing universities and their accommodation options today. Notably she raised the issue which has been a hot topic for a while now, and one with which St Leo’s has an ongoing dialogue with Residents: the issue of consent and respectful relationships and the work being done through the Respect. Now. Always. initiative.

Her opening remarks referenced both the University of Queensland and St Leo’s Re-think program, specifically noting the work St Leo’s (and Grace College) have been doing in the gender equity/respectful relations space.

You can read a full transcript of her address here.

UQ is proactive in this area too and has set up a Sexual Assault Working Party, working with other UQ colleagues to arrive at best practices to assist those people who come forward with sexual assault complaints find closure and a way to move on. St Leo’s Head of College, Steve Foley is part of that committee.

Amongst other measures, St Leo’s and Grace College has taken the first step in ensuring its Residents are aware of their responsibilities to keep all collegians and visitors at the college respected and valued.

St Leo’s notes its commitment to addressing the many challenges that arise in this young adult learning space and to ensuring it can continue to be a force for good and meaningful change to behavioural norms within Australian society.

“St Leo's shares the national sense of shame around what inaction there has been to assist survivors of sexual assault achieve closure and then find a means of moving on with their lives.

Whilst St Leo's has taken steps in recent years to educate its young men in the importance of respectful relations, fully informed and equally negotiated consent and the role of ethical bystanders in ensuring there is not an environment at the College that tolerates predatory behaviour, it could have done more and will do more. St Leo's accepts its responsibility in being part of the solution to this national problem and commits to delivering programs to all its incoming Residents to deliver this outcome.”